Behind the Scenes: The Interview with Dr. Dobson 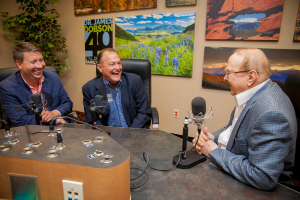 As many of you may know, I was recently honored to be interviewed by Dr. James Dobson on his national “Family Talk” radio program that has seven million listeners. People keep asking me how the interview came about, so here’s the rest of the story.

Dr. Dobson’s books and radio program helped a whole generation of parents raise their children—including my wife Margot and me! In addition, there was connection in my mind between Dr. Dobson and SSI going all the way back to the early days in the mid-1990’s. Right from the beginning of SSI, all of our first-year students are instructed using a Biblical world view curriculum based on a book entitled Understanding the Times, by Dr. David Noebel, who was also the Founder of Summit Ministries in Colorado. I discovered at some point, that Dr. Dobson’s son Ryan had a life-transforming experience there in his teen years. That caught my attention along with the fact that Dr. Dobson featured Summit Ministries on his program giving them tremendous exposure from coast to coast!

I often thought how amazing it would be if someday I could be on that program to talk about SSI. In the meantime, both Dr. Noebel and Ryan Dobson were keynote speakers for our Annual Banquet and I was able to hear the story first-hand. In addition, throughout the years, various other SSI Banquet speakers such as Josh McDowell, Rick Santorum and Mike Huckabee all urged us to “take this show on the road” and expand SSI to other states. Now after years of wondering if that could ever be possible, doors are starting to open—first in Minnesota, and Iowa has also come on board. The timing of this national exposure could not be better!

Fast forward to December of 2016 when out of the blue, Lisa Granger—whose daughter had a great experience at SSI—asked me if I had ever been interviewed on Dr. Dobson’s show. I said no, but that I had long desired him as a speaker for our Annual Banquet and that being on his show would be nothing short of amazing. Lisa told me that she and her husband Keith were friends with Dr. Dobson and that she would be willing to make the introduction.

After a letter inviting Dr. Dobson to speak for our 2017 Banquet—which was graciously declined for this year with the possibility of him coming next year—we exchanged numerous emails and phone calls, which resulted in an interview being scheduled for August. Needless to say, this was the fulfillment of a life-long dream and I was excited! In addition, they asked whether one of our alumni could join us, and I immediately thought of Jonathan Williams. He attended SSI from 1999 – 2000 and in addition to being a big promoter of the program, is now the Economic Policy Director for the American Legislative Exchange Council in Washington, D.C. He rearranged his schedule and flew out to Colorado Springs to join us on the program.

The whole experience was amazing! We met for a pre-interview meeting in Dr. Dobson’s office and he described the change in his son Ryan during that one week as being nothing short of miraculous and an answer to prayer. You can imagine my enthusiasm in telling him that we’ve seen that kind of change in hundreds of students over the years. When Dr. Dobson asked why he had never heard of SSI before, I told him that we have been focusing on building a mile deep instead of a mile wide and that people outside of Michigan are just now starting to take notice. I was thrilled to hear how excited he was to promote SSI to the nation, and on top of that, he extended the interview to a second day, which was a great blessing!

The response has been wonderful, with calls and emails coming in from across the country and our web site inundated with visits. Here’s an excerpt from an email by a very well-connected individual who is now exploring the idea of bringing SSI to Texas:

I listened to your broadcast with James Dobson today and was captivated by your ministry and effort to equip young people with the ability to stand in the face of cultural adversity and persecution. When I heard your broadcast today, I was overcome with excitement and hopeful for the opportunity to join your efforts. I have not heard of you or SSI before and have only perused your website briefly this evening, but I’m completely sold on what you’re doing. It’s important and valuable and so, so necessary!

I have often said that an endorsement by Dr. Dobson is like the Good Housekeeping Seal of Approval, and people often tell me how excited they were to hear the interview! One Christian School Principal said that as a result, parents were asking him to bring SSI to their school!

Do not let kindness and truth leave you; Bind them around your neck, Write them on the tablet of your heart. So you will find favor and good repute In the sight of God and man.

I thank God for His favor as we have focused on fulfilling our mission of empowering a new generation of young people to be courageous Christians in a corrupt culture!