A Destiny Written by Him 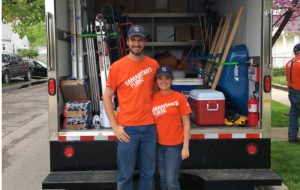 ​Sometimes in life we are given options and it can be hard to figure out which one to take. It’s not that one is better than the other and it can be difficult to decide what to do and where you feel God is calling you. That was me summer of 2017. I was asked by a friend if I would be interested in being a Nanny for their baby due in August and then I found out about the SSI job and applied with very little thought of getting it. I did the interview process to be a Nanny and had the contract in my hand ready to sign when I got the call asking if I wanted to interview for SSI… semi freaking out I said yes. I interviewed and the next day was offered that job as well. Now what? I have two job offers for things that I love. It felt like I could take either of them and be happy with it, so why was I offered two of my “dream jobs” in the same week? One of them had to be not in Gods plan, so why did they both feel right?

Obviously, I took the SSI job and am so thankful I did. The past two and a half years have included a lot of growing in the Lord and learning to trust Him. I have a hard time picturing what my life would be like now if I had taken the nannying job. Would I still live with my parents, would I have a stronger relationship with Christ, would I have travelled as much, would I be getting married this year? All these questions and yet finding peace in that Jesus had me then and He has me know. We can try and mess with Gods plan for our life and we can “get it wrong” and screw up but ultimately, if our God is for us then who can be against us? Two and a half years of working for SSI and I can’t begin to list how thankful I am for each day and every person who has impacted me over that time. God has remained faithful through all the uncertainties. Whether it was my first year as staff at LEAD and feeling like drowning in “I don’t knows” or learning the basic day-to-day of the office, He was there patiently waiting for me to cry out, “Jesus help me,” and He did.

The next chapter of my life is another one filled with excitement and fear. Moving states away to where I know almost no one and marrying a man whose job doesn’t guarantee he will be home at night, but one thing I know for certain is that no matter where life will take me, my God is unfailing and always there with open arms just waiting for me to fall into when it gets hard. His plans are far greater than my plans and His ways are higher than mine. No matter what life throws at me as long as I keep Him as my compass, I will be able to take whatever life throws at me because my destiny is written by Him.

Joslyn Nelkie first attended SSI in 2016 and fell in love with the atmosphere and the people. She developed an interest in politics and political campaigns at the age of thirteen and continues to be involved in her not-so-free free time. Joslyn enjoys spending time with family and helping out on the family farm, and is blessed with 15 siblings through the foster care system.