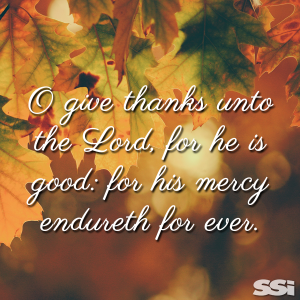 I love the story of the first Thanksgiving. In December of 1620, the Pilgrims landed at Plymouth, Massachusetts after a harrowing journey across the Atlantic that left them far north of Virginia—their original destination. In his book, Of Plymouth Plantation, Governor Bradford said that after landing,

“they fell upon their knees and blessed the God of Heaven who had brought them over the vast and furious ocean, and delivered them from all the perils and miseries thereof.”

From the outset, they were confronted with extreme trials and tribulations. Although half of their company died during that first winter, Bradford described their undaunted faith:

“So they committed themselves to the will of God and resolved to proceed.”

What extraordinary faith and determination! We know that they persevered and saw God’s provision. With “providential” help from Squanto and the Wampanoag native Americans, the first harvest was celebrated with a great feast in the fall of 1621. In his account of the first Thanksgiving, Edward Winslow wrote,

“…yet by the goodness of God, we are so far from want that we often wish you partakers of our plenty.”

They didn’t give up or waver from their mission even under extreme duress. Governor Bradford said,

“They had an inward zeal of laying good foundations, or at least of making some way for the propagation and advance of the kingdom of Christ in the remote parts of the world, even though they should be but stepping stones to others in the performance of so great a work.”

This describes an amazing aspect of the Pilgrims’ character. They were looking down the corridors of history fully aware that their sacrifice was laying a foundation for future generations!

It is my prayer that God will not only fill us with overflowing thanksgiving for His provision and goodness, but also enable us to follow the sacrificial and challenging example of our Pilgrim forefathers.