Duty is ours, results are God’s.

Each year at the SSI Annual Banquet, in recognition of exceptional leadership accomplishments, Ambassador League students who complete all the required assignments receive the John Quincy Adams Award. 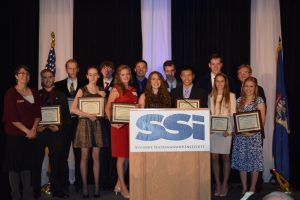 Why did we name the award after this President? The answer is simple. Starting at the age of 14, John Quincy Adams served as a Secretary for an Ambassador to Russia who for three years was on a mission to gain recognition of a new nation called the United States of America. We thought there is no better way to acknowledge the incredible accomplishments of these high school students who go above and beyond the call of duty.

John Quincy Adams served with distinction at a very young age, and our Ambassador League Students are following his example. This one‐year practicum is designed to move young people toward service and community awareness while also deepening their knowledge of God’s Word. We do this by pushing students outside of their comfort zone, outside their sphere of relationships, and into their community. Students who complete this course find themselves well prepared to effectively communicate their values in future academic and professional settings. They earn points toward their goal by accomplishing assignments such as word studies in Scripture, writing letters to the editor, attending local government meetings, interviewing and shadowing local leaders from various occupations, and volunteering time for non-profit organizations and campaigns. Each project is designed to develop leadership skills while applying the principles learned at the SSI LEAD Summer Program.

That brings me back to our hero. John Quincy Adams’ lifetime of service resulted in his becoming the 6th President of the United States. Amazingly, he is the only former President to then run for Congress and we know that he was motivated by his burning passion to end slavery. For seventeen years in Congress, his outspoken opposition to this horrible institution earned a nickname from his opponents, “The Hell-Hound of Slavery.”

Although he was unsuccessful, when asked why didn’t he give up, he simply replied, “Duty is ours, results are God’s.” He understood that we are called to do the right thing, whether our efforts produce any results—or not. That takes an incredible amount of patience, perseverance and an unwavering commitment to the truth, no matter the opposition.

What most people don’t know is that during John Quincy Adams’ last term in Congress, a young lawyer from Illinois named Abraham Lincoln was elected and served one term as a U.S. Representative. During this overlapping time, these two men—older and younger—joined forces in their opposition to slavery. Can you imagine their conversations and the rich knowledge that Lincoln must have gleaned during their short time together? We know they were close, because when John Quincy Adams passed away (while giving a speech against slavery on the House Floor), Lincoln was appointed to serve as a member of the Committee on Arrangements for the funeral.

It is interesting to note that John Quincy Adams was the only U.S. President to know both George Washington and Abraham Lincoln! And although unsuccessful in his quest to end slavery in his lifetime, just twelve years later his protégé Abraham Lincoln was elected President.

And you know the rest of the story!