Empowering Teens to Change Their World: Ambassadors for Christ 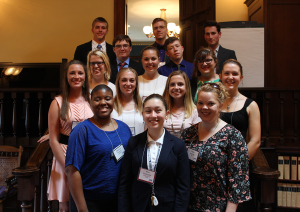 What is SSI? SSI stands for Student Statesmanship Institute. This program founded by James Muffet is stated by their website to be, “a dynamic hands-on leadership and biblical worldview training program for teens. SSI prepares teenagers to live and defend their faith in high school, college, and in the marketplace of ideas, and trains young people to be leaders in their generation.” This program for me was, to say the least, different. I have been taught how we, as the next generation, should educate ourselves about government, but to be honest I never really cared. Maybe I was lazy; maybe politics just annoyed me. Who knows? Though I thought I might be bored, I still, in the end, decided on going, because I was thankful for the scholarship. I did not want to miss out on something that could have a positive impact on me. Sure enough, I did not want to leave once the week had come to an end.

What did I do there, you ask, that could change my perspective so drastically? The week started with each participant being placed in a group/caucus. My team and I represented the House of Representatives, while other students represented the press, media, and other members of the government. The House members were given a bill to support, and a bill to oppose. The bill my caucus focused on was about motorcycle helmets. We had to convince people that motorcyclists above the age of 21 had to right to choose whether or not they would wear a helmet when operating their vehicle.

The bill we opposed was entitled “Wrongful Imprisonment Compensation.”  We intended to convince people that those who were wrongly convicted of a crime, and spent time in jail, should not receive compensation. These were the bills we were given at the beginning of the week, and the ones we took to the Ccapitol of Michigan to discuss. Not only did we interact with participants in the program, we also spoke with lobbyists who had had previous experience with the topics that were being discussed in the bills. Throughout these professional discussions on-campus and off-campus, each student had a role to fulfill. Though these roles required much time and effort we were still able to be ourselves during activities such as chapel, free time where we could play games, a talent show, lunch where the media would act as news reporters keeping us updated on current events, and campaigns. During chapel, we would listen to Christian speakers while also being able to praise the Lord through song. During free time we could go anywhere on campus and either play the piano, play basketball, stay inside and study, sleep, etc. During the talent show, we were able to open ourselves up to the students we had recently met and show them things we were good at.

Campaigns consisted of campaigners trying to convince other students to vote for their party. Each party represented a man who was running for governor during the time our bills were attempting to be passed. To say the least, throughout this week we were fully submerged in a political lifestyle. Though it was hard work, we had so much fun writing, researching, and learning. Towards the end of this experience, we finished by going again to the Michigan State Capitol. My caucus along with other caucuses sat where real House of Representative members sat, and we presented our bills by giving our speeches and rebuttals. Not only did we propose bill, we voted, made amendments, and in the end we celebrated our hard work. This was done by congratulating the “governor”/party who had been elected, those who had gotten their bills passed, and those who decided to commit their lives to Christ as a result of this program.

To say I got more than I bargained for is an understatement. Because of this program, I learned leadership, discipline, and responsibility. I cannot say enough about how wonderful the leaders were. Their dedication and the education they provided opened each student’s eyes to a new way of life. We were no longer students; we were the leaders. These men and women equipped us to have a better understanding of God’s plan for our lives. They want us to go out and make a difference as Christian statesmen. SSI states, “A Christian statesman, therefore, engages the public conversation at all levels applying a biblical worldview to every area of life to the glory of God and for the benefit of society as a whole.” If this is their wish for us, I can truly say from experience, that with the Lord’s help they are succeeding.

I know now that I should not just study history. I should be a part of it. I have a duty to be an ambassador for Christ because I am a citizen in heaven and on earth.