My wife’s best friend in college married a guy who could juggle while riding a unicycle. Now twenty years later their family of seven travels the Midwest putting on shows, weaving round and round on long-necked bikes catching and tossing pins with flamboyant poise.

SSI LEAD reminds me of one of their performances, thousands of movements dovetailing together in sequence. Three weeks, five venues, eight tracks, 300 students, and hundreds of volunteers all in the right place, doing the right thing, at the right time. It’s no wonder it takes months of planning. 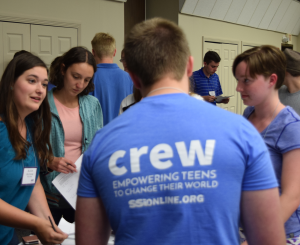 But the beauty of LEAD is that the students have no idea of the logistics required to put on a successful week. One of the reasons they don’t notice the myriad of details falling into place around them is because they are focused on keeping their own set of balls in the air. Students in the House and Senate grapple with their bills preparing for Wednesday’s committee meetings and their Friday sessions on the floor of the Michigan State Capitol building in downtown Lansing. Print media students jump right in Sunday night publishing the daily paper, the first of which hits the newsstand Monday morning. The media team scrambles to produce three broadcasts throughout the week including two that are live. Mock Trial participants spend all week prepping for the three murder trials held on Thursday and Friday. And the Moot Court students disappear into their black hole to wrestle with an appellate case which they argue before Chief Justice Markman, Justice Zhara and Judge Wagner in the Michigan State Supreme Court Hall of Justice. 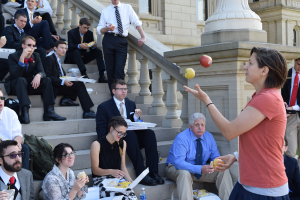 Underlying all the busyness going on in each track is the clear and firm bedrock of truth students are uncovering daily. Through morning devotions, evening chapel, and biblical worldview sessions, students are reminded they are created in the image of God, their ultimate identity can only be found in Jesus Christ, and their highest calling is to be his Ambassador. As James says, “We hope to spark them to be leaders in their generation. I’m not trying to make a bunch of politicians. My goal is for them to stand up for their beliefs against the tide of destruction in our society and shine as lights in their generation.”

But I like how the students say it in their own words.

“God relates to every part of life…LEAD is a great place to learn, make friends, and worship God together.”

“God taught me the value of diverse friendships and opinions…this was a great experience and probably one of the best weeks of my life.”

“He has built me up in the Holy Spirit and established my identity in Him. I am called to be an ambassador.”

“The Lord has taught me that I have a new identity in Christ and has made me a new creation.”

It was amazing to see what God can do in the lives of young people this summer, and I can’t wait to see what He has in store for next year!

Tim Van Loh has served as Chief Operations Officer for SSI since 2014. As a father of two SSI alumni, he fully appreciates the benefits of what the program can do for students and families today. Two interesting things about Tim are that he lived in Japan for nine years and currently lives in a three-generational household.