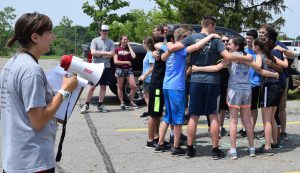 Our first week of SSI LEAD just ended and we’re already all hands on deck preparing for Week 2.  Here’s a brief overview of last week and the types of things I saw as the Director of Programs.

WARNING: LEAD can be one big inside joke that you won’t fully understand until you experience it, so I apologize in advance for the some of the things I’ll say that some may not understand the significance of.

Saturday: The volunteers arrived on campus at 5 pm and we started giving them the information they need in order to make this week a success with every student.  It’s incredible to look back and remember that when I was an Aide-de-Camp (ADC), we arrived an hour before the students did.  Talk about trying to drink from a fire hydrant!

Sunday: After breakfast all the volunteers and staff met in the Chapel for worship and an overview of the weekly devotions (led by Mr. Muffett and Mr. Van Loh respectively), then we split off in groups for our prayer walk, covering every area of the campus in prayer and asking that God bless this week.  The students started arriving shortly before 5.  It’s always cool to see the first kids roll in and feel the excitement knowing that camp has started.  I loved to see the ADCs interacting with them right away and doing an awesome job with their registration duties. That evening in dorm orientation I loved the confusion from those who had no idea why they would be hearing ukulele (it’s how we tell the girls to turn out their lights at night) or why “Question: Dry erase markers” was so funny (you had to be there). 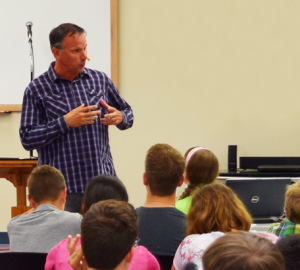 Monday: I was able to meet some of the amazing first year students and reacquaint myself with the returning kids.  I also had my first session with the Senators. They’re a great bunch this week.  The speaker tonight talked about how God prepares us with our toolbox.  Sometimes He’ll give us a tool and we won’t know why we need it until later down the road when He asks us to pull it out and use it.  It was a powerful talk and I was blown away to find out later as I was talking with him that his notes didn’t reference tools or a toolbox once.  God brought it to him in the moment.  Wow. 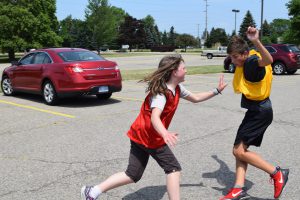 Tuesday: Started the day off with some morning yoga with a couple students. That was awesome. One student commented at breakfast how relaxed she felt, much more prepared to face the long day ahead, and we decided to do it again Wednesday morning.  We had our campus-wide game time, Feats of Strength, which required a bit of extra thinking as the games that were going to be played were switched around last minute, but it turned out well regardless, even though it seemed like a million kids injured themselves.  I also was able to take some time after dinner today to go with a couple girls to a one of the piano practice rooms and sing some songs from Hamilton and Les Miserables.  It was great to unwind with music.

Wednesday: We tried a new setup for committee meetings where half the groups were in one building and half in the other.  There were definitely some opportunities for personal growth as we faced some difficulties with timing and communication, but things ended well and I’m incredibly thankful for the ability to use both rooms in the state Capitol as well as the Senate Building.  Back at campus, there were a few more opportunities for growth, and I had to take some time to deal with some things I had been internalizing.  I received some unexpected help from three disc golfers, an incredibly considerate student, and a fantastically caring and wise ADC respectively.  Even as a staff member, I always leave LEAD having learned something and having grown.  Tonight was the night this growth happened.  Through this experience I was shown the importance of letting things go and how I could go about working better with people.

Thursday: After the hectic agenda of Tuesday and Wednesday, the more laid back schedule of Thursday was a welcome relief.  I was so blessed throughout the day by ADCs who kept asking whether there was anything to be done and making sure the paperwork was processed and put into documents on time. We had a talent show tonight.  The highlight was definitely the sock monologue.  Again, you had to be there.  At the end of the evening free time, I was interacting with the student I’ve been doing yoga with, and I asked whether she wanted to do a few stretches before the evening study time.  A few other students joined us.  It seemed like a great way to calm them down as they were about to finalize their speeches for the next day.  Tonight was the last day of singing the lights out song to this group.  That’s always hard, but I try to focus on the great week we had rather than how it is ending. 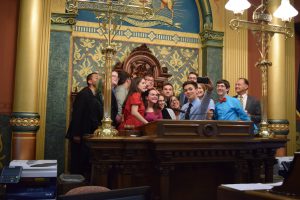 Friday: Both the House and the Senate sessions went incredibly well.  I couldn’t help but be proud of how the Senators composed themselves and remembered decorum, and some of the House kids especially blew me away with their speeches.  Lunch was great as I spent it talking with a Business student about how that track works (even though I’ve been coming to LEAD since 2011, I have next to no idea how the Business track works).  Then we had so much extra time after the House session that the kids had time to change before the closing session. I only teared up saying goodbye to one person.  It was nice emotionally not to be dealing with tears in the chaos, but even though I wasn’t crying as I said goodbye to everyone, I’ll definitely be missing a lot of people.  Hopefully I’ll be seeing them down the line as students next year or maybe even ADCs.

Here are my takeaways from the week:
1) Dwelling on the negatives and the things that go wrong never helps. Focus on the silver lining of every difficulty, and it will be easier to deal with.
2) Rest is important.  Even though I don’t feel like I need it, I should be finding time when I can take off and rest.
3) When interacting with people, it’s important to always have that person’s best interest in mind.  This will make for an overall better relationship.
4) Age isn’t everything and those who are younger than me can still teach me something.
5) Blessed are the flexible for they shall bend and not break.

I’m incredibly thankful for the grace and mercy God showered upon me this week allowing me to complete what I needed to, and for those He worked through this week to help me.  I had people who helped prepare documents in the office, those who helped set up the Feats of Strength, ADCs who were willing to run to another building to grab something I had forgotten, and a helping hand or two to give me a back-rub when I really needed it.  Looking back it’s incredible to see how God was sustaining everything throughout the week.  He is good and it’s awesome to see His hand in LEAD.