Wow.  That’s the biggest thing I have to say about Week 2.  Wow.  What a week.  I don’t think I have ever been so NOT tired the day after camp.  I’m sure I’ll still be taking a midday nap, but I woke up between 8 and 9 and have been unpacking and doing laundry and cleaning and just feeling kind of normal, which is insane considering the week I just had.  Right from the start Week 2 was incredibly different.  First of all everything was going great (and with a camp as big as LEAD with all its moving pieces, something is almost guaranteed to go wrong on Day 1).  We had an excellent group of volunteers who bonded really well, and time seemed to drag in a good way.  At camp it seems like there is never enough time to do anything, but all day Saturday, Sunday, and Monday too, I couldn’t believe how often I looked at the time and thought to myself, “Wow, I’ve got time left.”  Things still ended up going awry and there were problems that needed to be resolved, but it was never too much.  I think the closest I came to hitting a wall (which happens EVERY week; this is the first time in my time with SSI that I can’t nail down a point where I absolutely fell apart) was Tuesday, which I’ll describe what happened in the day by day breakdown.  Might as well jump into that now:

Saturday: Arrived early on campus to prepare for the volunteers to start coming in.  Found out that an ADC wouldn’t be able to come and God provided a replacement within hours.  God is good all the time.

Sunday: Volunteer sessions all day.  Really excited to be working with this group.  I loved the love languages session we had.  It’s fascinating to hear how different people give and receive love. Incredibly thankful for the help of all the students of volunteers who helped us set up campus.  When the rest of the students arrived that night (every one of them, praise God that no one cancelled last minute), it was so nice to see people I hadn’t seen for a year. Lights out was amazing (and this was true all week long).  The girls were so ready for me, except for that one group whose light was already off and they turned it on RIGHT when I started singing “lights out.”

Monday: Great session with the Senate.  Played volleyball during evening free time.  I was able to take some time with a friend after Chapel to talk about life and God’s plan for us.  God is good. 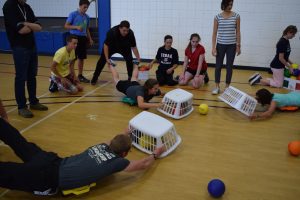 Tuesday: Started the day with a 6:30 am run with my roommate (who is absolutely too cool for words).  All day I was regretting that run though because I ended up doing so much running around for everything else that I was physically beat by the end of the day. I was thankful for the time with my roommate though.  Prepped for Feats of Strength all morning. Really excited for the games we have. The live broadcast ended up being delayed so we had to have it right before Feats of Strength, which affected a few details about how we did things.  I rolled with it though and it ended up working out.  I did have to take a chill break on the ground immediately after sending the kids out just because I couldn’t process anything else at that time.  It was AWESOME to watch all the games.  Hungry Human Hippos was beyond what I could have thought or imagined.  The water balloon game was great too.  Heard some beyond awesome cheers for the teams.  First round of amendments from the Senators came in, and I had to edit those and explain why grammar doesn’t work the way they think it does. 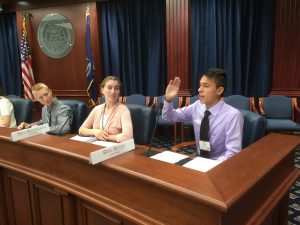 Wednesday: COMMITTEE MEETINGS!!!  Despite the hundreds (no exaggeration) of moving pieces involved in Wednesday’s press conferences and committee meetings, everything went well.  I took a great break from 2:30 to 4:30.  It was much needed.  Senators did an awesome job finishing their articles by the required time.  So proud.  That night, I had the chance to play some Hungry Human Hippos myself.  I definitely approve.  Then I spent some destressing time by folding the next morning’s paper and listening to showtunes with some amazing people.  I had to go around the dorms letting the girls know that my energy level was low and I couldn’t do lights out that night.  The reception I received nearly made me cry.  They were so concerned and encouraging.  It’s incredible when the students you’re there to minister to turn around and start ministering to you.

Thursday: Thank God for Thursday.  The calm after the storm of Wednesday was exactly what I needed.  I was able to take some time in the afternoon to rest.  Lots of amendments to be checked and corrected.  I felt like I was back teaching English again (it didn’t help that one of my previous English students was actually in Senate hearing me talk about how commas can’t go between the subject and the verb).  Amazing talent show.  Last lights out, but I didn’t cry.

Friday: Woke up to find my door covered in notes from students.  That day I was handed five more handwritten notes, not to mention all the sweet comments people left on my binder.  The love I received from everyone was indescribable.  Such a blessing for someone whose second strongest love language is words of affirmation.  The Senate session went incredibly well.  They blew me off my feet. Lunch, then the House session.  It was awesome to see the students running the different positions up front.  Back to campus in time to change (thank you God) and go to the DOTY for the closing ceremony.  I was incredibly blessed by all the students who sought me out to say goodbye.  It’s always a shame finding out someone left and you didn’t have a chance to say goodbye.

As always, God was showing me things this week.  Here’s was I learned:
1) It’s okay to ask people for a hug when you need one.
2) Give explicit instructions because it’s better to give too much information that have to ask people to redo something.
3) “Senate is definitely better than it used to be.” -Several ADCs helping with Senate this week.
4) People appreciate hugs, especially if those people are in Mock Trial or Moot Court.
5) Eating is good. Skipping meals is not sustainable.
6) Always bring blankets to camp. You never know when your dorm is going to be bipolar and be incredibly hot during the day and freezing at night.
7) If there’s a hole that needs to be filled, you can trust that God is going to fill it in His time, and there is no way anybody could find a better plug at a better time.