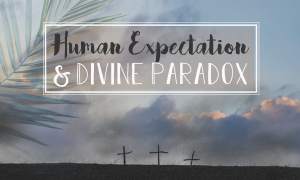 When Jesus rode into Jerusalem, people expected many things from Him. The crowd shouted “Hosanna!” (Hebrew for “God save us”) at the man rumored to be the Jewish Messiah finally come to liberate His people.  Others waved palm branches, which were often were used to greet victorious kings returning to their city to claim their rightful place. Some may have waved palm branches as an act of rebellion against the Roman government, nodding back to the Maccabean revolt and celebrating the victory of God and the Feast of Tabernacles.  Expecting Jesus to take the throne as the Victorious King, greeting Him as their Savior,  or celebrating Him as their Liberator were all fitting things to do.. The problem with the expectations of the crowd on that first Palm Sunday was that they did not expect Jesus to do what He did in the way He did.

Just a few days later, the One they lauded as victorious king, savior, and liberator was tried, convicted, publicly humiliated, brutally executed, and pronounced dead. This was not how things were supposed to go.  Even three days later, when He was miraculously resurrected, He didn’t raise an army, overthrow the Romans, or even displace the Pharisees.  He spent a little time with His close friends and disciples and then ascended into the heavens.  The carpenter/teacher who rode into the city on a donkey sorely disappointed the expectations of the crowd.

What if the Cross wasn’t the place where the Messiah was defeated by man? What if it was the place of the Messiah’s perfect surrender to the will of God?  At the Cross, the burden of sin that enslaved all humanity throughout all history was laid down by our Liberator. When the Savior died, He paid the ransom price for every fallen sinner, including you and me (Hebrews 7:27). When He rose again, He won victory over death and claimed the treasure of eternal life for all those who, by faith, would enter His Kingdom. When He ascended to Heaven, He took His rightful place as Victorious King, seated at the right hand of the Father (Hebrews 12:1-2).

Our Risen Lord is everything the Palm Sunday crowd expected Him to be; the way He chose was nothing like what they expected. As we celebrate His resurrection, there is no better time to reexamine what we expect of Jesus, and what He asks of us. It’s easy to make the Christian life about us. Jesus is our Savior. He set us free, but it’s not about us. Jesus didn’t even say that it was about Him. Instead, He took all the burdens that enslaved us, so that we can take on the burden He has called us to carry.

In Matthew 11:28-30, the Messiah calls to us, saying “Come to me, all you who are weary and burdened, and I will give you rest. Take my yoke upon you and learn from me, for I am gentle and humble in heart, and you will find rest for your souls. For my yoke is easy and my burden is light.”

He has called us to use this new life and the freedom we find in Him to love freely, to give freely, and to carry the light of the Hope that we have in Him to every corner of this globe (Matthew 28:18-20).   The beauty of the divine paradox, of the God who does the unexpected, is that the treasure we find in walking in the freedom He has called us to is far better than any human expectation.

Katie Schmidt is the Director of Communications at SSI. She is fascinated by how biblical presuppositions inform history, philosophy, and critical advocacy and enjoys engaging with her community and church, learning news things, and dabbling in creative pursuits.

Get Your LEAD Gear!