LEAD is in Michigan, Minnesota, Iowa and coming soon…Wisconsin!

The last week of July was amazing! After completing the third week of LEAD in Michigan, I took one day of rest and then got on a plane to visit the LEAD Programs running in other states. 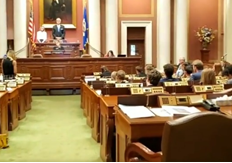 During the first half of the week I was a guest speaker for the Minnesota Family Council’s LEAD program at the University of Northwestern in St. Paul. Michigan’s former SSI Program Director, Christiana Nuñez, is now the director and is doing a fantastic job! It was exciting to see other Michiganders taking part as well. The LEAD MN Media Track was headed up by David and Elizabeth Thompson, who ran the Media Track in Michigan many years ago. Anthony Weber, who has been a teacher for us in MI since the early 1990’s, was their Christian worldview speaker, and Charity Malick, an SSI alumna who is now on staff with YWAM, was also a guest speaker. It was a Michigan reunion!

On Wednesday, I flew to Des Moines to observe the second year of LEAD Iowa hosted by the Iowa FAMiLY Leader. Our Michigan Director of Programs, Aimee Chauvin, had been there all week helping as they added both a Senate and a Media Track. The FAMiLY Leader staff is amazing! Our hats are off to Nathan Oppman and his team for investing their lives in the next generation!

If all goes as expected, Wisconsin is next on the list. We were excited that after preliminary discussions in the spring, Wisconsin Family Council President, Julaine Appling, observed LEAD Michigan during our first week of 2019 in preparation for a 2020 launch. I was so excited to discover that the Chairman of her Board of Directors is former Michigan Representative Jack Hoogendyk, originally from Kalamazoo. While he was in the Michigan Legislature, Jack was heavily involved with SSI and is eager to bring LEAD to Wisconsin.

The dream of expanding to other states is being fulfilled, and it is humbling and rewarding to see the same results in the lives of young people even though there are different people playing the various roles! None of this could have been possible without the faithful generosity of our Michigan friends and partners throughout the years. God has blessed us to build something that is also a blessing to others!