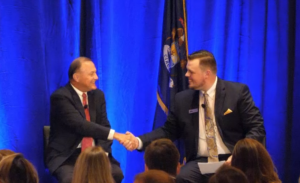 The vision for SSI from the beginning was to train a new generation of Christian leaders and we have been thrilled to see so many SSI alumni fulfilling that dream since our early days in the 1990’s. To everything, however, there is a season, and we are now entering a new season for this ministry. Psalm 145:4 says, “One generation shall commend Your works to another.”

That is why I am excited to announce that our current COO, Joe Cecil, is ready to step up to the challenge of leadership. He attended SSI starting in 2009 as a high school student three times and completed the House, Senate, and Media Tracks. Joe continued to help SSI by lobbying for our summer Legislative Tracks and serving as an aide-de-camp. He has worked on a variety of state and local political campaigns and most recently spent four years working for the Michigan House of Representatives where he served as a Legislative Director and Member Advisor. He married Charlie Ann in 2015, and together they are raising their growing family.

Since coming on staff as our COO in 2019, we have had extensive conversations about the possibility of Joe assuming the leadership of SSI long-term. And during these last two years, I, along with the SSI Board, have come to believe that he has the leadership capacity, the skill set, and the vision to carry the ministry forward. Joe has taken increasing responsibility for the management of all aspects of the organization and has done an outstanding job. In addition, he has successfully assumed the teaching responsibilities for our Onsite and Summer Programs. He has a dynamic communication style that really connects with the students. In short, I have come to trust him and believe that he is the right man for the future.

And so, it gives me great pleasure to announce that the Board of Directors has named Joe Cecil the new President of SSI, effective immediately. He will assume the full responsibility for the leadership of the organization.

I want everyone to know that I am not yet retiring, but am repositioning! Therefore, I will remain the CEO during this transition season, focusing on raising funds and seeking to expand to other states while helping Joe however I can. I have spent 27 years launching and maintaining SSI, and it is truly rewarding to pass the torch to one of our alumni. God has brought this all of this to pass, and I know that He will continue to bless this organization under Joe’s leadership far into the future.