Having been around SSI LEAD for 9 years (2 as a student, 4 as a volunteer, and 3 as staff), it’s always fascinating to see how someone else does it. Last year (2017) I was able to meet Nate Oppman of the THE FAMiLY LEADER (TFL) in Iowa who would be heading up LEAD out there. He had come out to observe Week 1 in Michigan. I also met Daniel Sunne and Ashley Baker from TFL in SSI Minnesota later that summer. As I interacted with them during the camps, I tried to think of all the little details that might slip through the cracks but can make a world of difference. After summer we began the process of gathering together all of our materials that might be useful to them and putting them together in a format that wasn’t immediately overwhelming. I’m not sure how well we accomplished that task, but we did our best.

Timelines were modified, documents edited, and every aspect of our program was scrutinized to make sure we understood why we did things a certain way so that we could pass on that information. In monthly conference calls we would go over the timeline and check in to see how they were doing. From the very beginning it was apparent that TFL had the manpower and resources necessary to pull off the forty-two-ton administration lift required. Speakers were lined up, chairs and lobbyists were recruited, bills were chosen, and the Iowa capitol was reserved. June came and I became absorbed in LEAD Michigan, barely having time to wonder how things were coming along with Iowa.

Finally Week 3 comes to a close and I start the debrief process for Michigan and then pack my bags for Iowa (making sure that my ukulele is safely stored for the long voyage). It’s exciting to meet the staff and volunteers who will be making sure the program has a successful first year. Staff orientation starts Saturday afternoon, and Nate introduces the team. Chaperones and ADCs are composed of TFL staff, those who know TFL staff (church members, former interns, and one mother), and one ADC who was too old to attend as a student. The team gels right away as we start our team icebreaker: playing the games we’ll be doing for Feats of Strength. I nearly had my first ROFL in our run-through of Blind Leading the Blind, a game where one blindfolded team member needs to accomplish a task, but the only person on the team who can talk doesn’t know what the task is. The rest of the team tries to convey the task through charades. My team was trying to convey “set the book down” to the team-member who could speak, but our actions were translated into “swipe the book across the table” and then “throw the book,” both of which the blind person executed with vigor, knocking nearly half the items off the table. 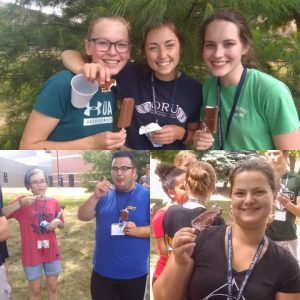 We go through a mock caucus meeting, mock press conference, and mock committee meeting, and volunteers slowly develop a picture of what the program looks like. Ultimately though, the whole point of LEAD is to learn by doing, and there’s only so much that can be taught before the students come. Students arrive Sunday afternoon, check in, move into their dorms, and head to the Chapel for an icebreaker. Again I reflect on how everything is so different from Michigan, and yet the mission is the same: to pour into youth and train them up to be Ambassadors for God.

From caucus meetings to free time to devotions, I watched the students of LEAD Iowa struggle and learn and bond, just like they do in Michigan. Over the week I was able to see the staff’s months of hard work and preparation come together to provide a stellar program for the students. God was working through every detail to bring glory to Himself and bring others closer to Him. It was an honor and a joy to be a part of LEAD Iowa’s first year, and I cannot wait to see how God continues to work through them.